Born in 1976 in Kostrzyn nad Odrą,  he lives and works in Warsaw. He is a graduate of the painting studio of Professor Jarosław Modzelewski and the audiovisual space studio of Professor Grzegorz Kowalski at the Academy of Fine Arts in Warsaw. He deals with video installations, documentary films and performance art. Wysocki has presented his works at individual shows (such as Aldona, Zachęta National Gallery of Art in Warsaw, 2007; Practices, Museum of Sculpture at the Królikarnia Palace in Warsaw, 2013) and numerous groups shows. He was honoured with the prizes Samsung Art Master (2006) and Eugeniusz Geppert Award (2009), and shortlisted for the “Views” Award in 2011. The artist mostly creates film portraits of excluded individuals and groups in which with great sensitivity he presents their psychological and social condition.

In a detached way Wysocki filmed the everyday reality on the Polish-Ukrainian border (which must be a reality to a degree, even if on a smaller scale, when it comes to bordering other non-EU countries to the East of Poland) – detailed ransacking of cars and coaches by which the economic migrants from the East reach Poland. The artist combined several cases of such ransacking, during which smuggling of cigarettes was discovered. In one case the customs officers broke the whole car’s doors open to reach the object of smuggling. This is often the everyday reality of many Ukrainians, who after the Maidan revolution and economic decline that followed, found themselves in very difficult material circumstances and working in the smuggling business is often their only chance of survival, often, as it must be stressed, worth very little money, especially considering the risk they take. Scrupulous ransacking makes us ask the question, whether small-time cigarette smuggling is enough to engage in a several-hour and slightly humiliating task, which makes the border crossing so difficult. 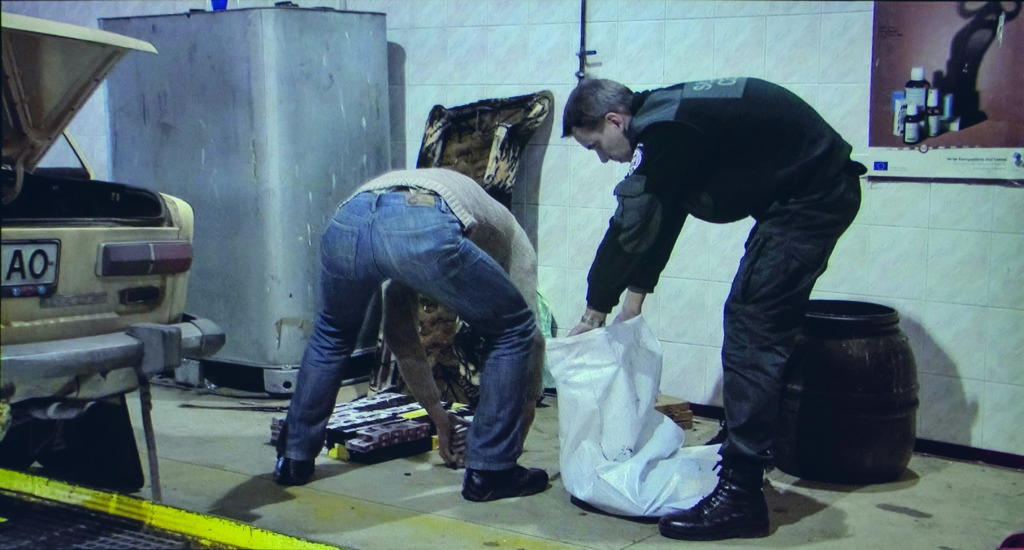