Open Group was founded in Lviv in 2012 by six Ukrainian artists. Over the years the structure of the group has changed and now it consists of four artists: Yuriy Biley, Stanislav Turina, Pavlo Kovach, and Anton Varga, and other people whom the group invites to participate in their projects and become their members. Open Group was awarded twice by the PinchukArtCentre with the Special Prize in 2013 and the Main Prize in 2015. Their work was presented at the Ukrainian national pavilion at the 56th Venice Biennale. In 2017, the group was featured in the Future Generation Art Prize @ Venice 2017 project as part of the official parallel program of the 57th Venice Biennale.

The project started with the so-called Gallery at the Stretch of the Road No. 2, created in 2014: the artists from the Ukrainian Open Group collective put signposts that usually mark the beginning and the end of a town or village, in two points: on the shore of the Stryi river next to Lviv and on the Azov Sea shore in the Kherson region. The space between them constitutes the so-called Open Gallery which encompasses everything that can be seen and sailed through within those 1000 km. In order to „see” it one had to sail through it. The first part of the project was a cruise on a self-made catamaran with 4 paddles which the artists made in August and September 2015. They cleaned the areas they were passing through, talked to people they met there, collected varied artefacts they could find on their way and collectively produced a film on that basis. During the 2 weeks the crew made 398 km from Stryi to the village of Ataky near Chernivtsy, producing the work which  was shown as part of School of Landscape at Kyiv Biennial in 2015. The show displayed the reassembled vessel, part of the collected artefacts, film footage, photos and records of various “gestures” from the trip. 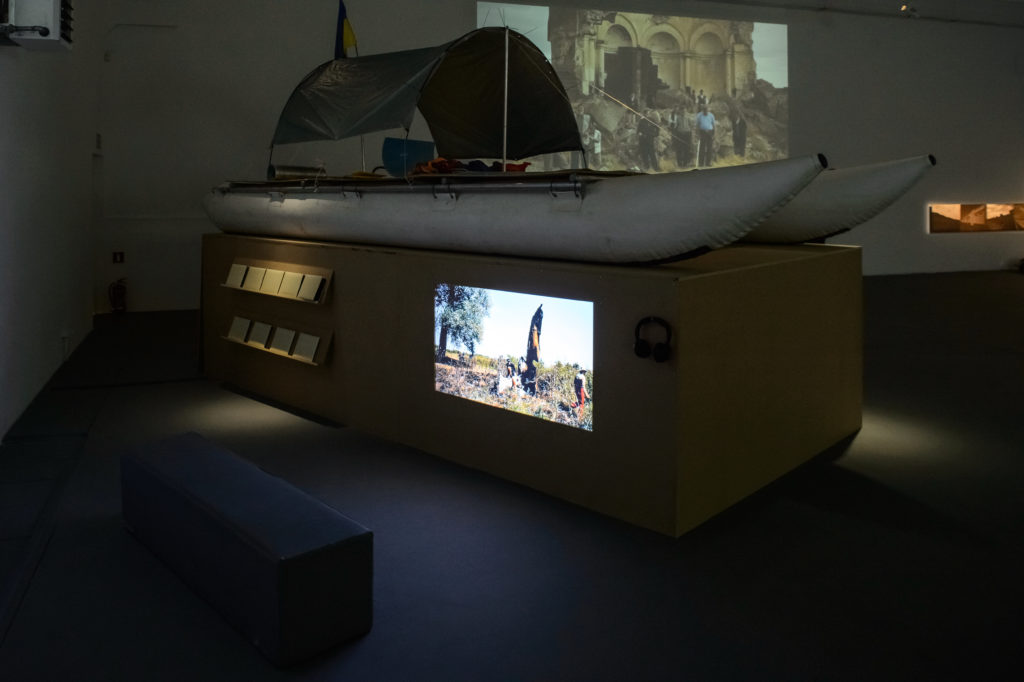 Part Two started on 26 July 2017 and it was a seven day journey on the same boat, from Ataky to the Moldova border. The result is on display at this exhibition. Overall, the project is at the same time conceptual and idealistic, bringing to mind the work by Dutch artist Bas Jan Ader. The limitlessness and openness of this work stresses its collective execution being at the same time a poetic, unobvious reflection on the destinies of one’s own country, its western and eastern regions and political division in Ukraine of the last few years.