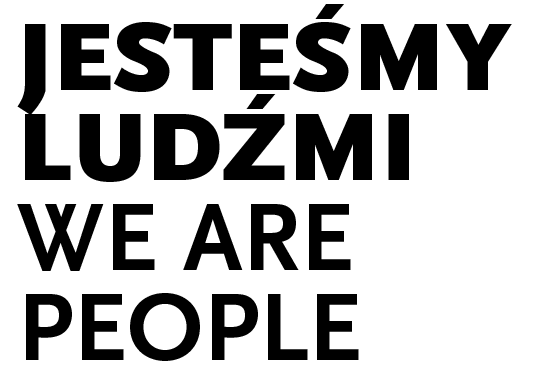 Is it necessary in the 21st century to keep repeating that a human being is a human being regardless of their origin, skin colour, gender, sexual orientation or any other traits? The answer to this question no longer seems obvious when the president of the country states: “They are trying to persuade us that LGBT are people, but it’s an ideology”, and his electoral campaign staff member adds: “Let’s protect ourselves from LGBT ideology and let’s stop listening to these idiocies about some human rights, or some equality. These people aren’t equal to normal people, end of discussion”
The exhibition “We Are People” reacts to the current developments and threats that they entail. When leading politicians make statements that challenge the inherent equality of all people and question what should remain unquestioned, it is hard to remain indifferent. “Auschwitz did not fall suddenly from the sky”, as the historian, journalist and former concentration camp prisoner Marian Turski remined us in his recent speech. It began with small, seemingly innocent steps, such as the so-called “ghetto benches” for Jews at universities. Thus, slowly and silently, evil creeped in, adopting its most gruesome form. A classroom bench – nothing serious, after all, we can pretend nothing is happening and carry on living… Later came the ban on using swimming pools, shops, public places… We know all too well how it ended.
We are currently turning a blind eye on many hateful statements from politicians, laying the blame, for example, on the heated public debate on the eve of the elections. When we fail to protest, we come to terms with such statements, we let them exist. “Monsters exist, but they are too few in number to be truly dangerous. More dangerous are the common men, the functionaries ready to believe and to act without asking questions” – wrote Primo Levi. A treatise on the banality of evil was penned by Hannah Arendt. Her words still ring true: “Evil is banal because it may go unnoticed, one may not think about it, it can be multiplied infinitely while concentrating on something else.”